Why engineers, architects and building designers depend on ClearCalcs to deliver their best work anywhere, anytime.

We chatted with Jim Fanjoy, Principal Architect at Brittell Architecture, about how ClearCalcs helps his company provide quality and responsive turnaround for its customers.

Founded in 1972 and describing themselves as a second-generation ‘Family Business’, Brittell Architecture believes that every design and construction project is a collaborative effort. To them - the more knowledgeable the customers are, the more likely they will participate in the design process and enjoy it.

When we recently sat with Jim Fanjoy, the Project Architect at Brittell Architecture, we saw how the team demonstrates the spirit of constantly learning in their approach to structural design calculations.

With a customer base consisting mainly of developers, businesses, and school corporations, Brittell Architecture currently serves clients in the Pacific Northwest region, especially in southwest Washington and the north Oregon coast.

"We generally do a little bit of everything focusing on light commercials and churches. But, recently, we've seen a shift towards educational projects and have been approached by clients wanting multifamily housing too.", Jim said.

“We don’t do a lot of marketing. We get most of the projects that come to us through existing clients or direct referrals.”

Jim's priority in his role is ensuring they provide quality service for their clients, which means responsive turnaround, accurate drawings, and in the end, making sure they are building a functional, efficient, pleasing, and durable structure for their customers.

Ultimately, for Jim, "I feel successful when we reach the end of a project and a client is glad they hired us. One good indicator for me is that we have a lot of return clients with whom we’ve built strong relationships, and they keep coming back to us."

Typically, Jim said, once a client hires Brittell Architecture for a project, the team will go into a kick-off meeting to understand the expectations for schedule and budget. From there, the project fast-tracks into the design work.

“We don’t usually get into anything related to structural engineering until at least halfway through the project.”

“We do most of our structural engineering in-house because it’s something we like and are fairly good at. Our projects are generally not complicated enough to require the level of expertise beyond what we can provide.”

A simple alternative to hand calculations in spreadsheets and buggy software

In the past, Jim and his team have been solving their design calculations by combining spreadsheet-based calculators they generate in-house and other software like Strucalc.

“Both were buggy and cumbersome to use,” explained Jim.

To solve this challenge, a simple-to-use structural engineering resource that also offers them value for money is crucial to Jim and his team's workflow.

"We don’t have a big budget for an elaborate structural software suite, and that wouldn’t be a good use of our resources if we did because we wouldn’t use all of its functionality."

After searching online, Jim said ClearCalcs was one of two solutions that made the shortlist.

“One of the things that initially got me excited about ClearCalcs is that the interface is really clean. It is intuitive and attractive, and it’s clear to me the software is easy to get a handle on.” 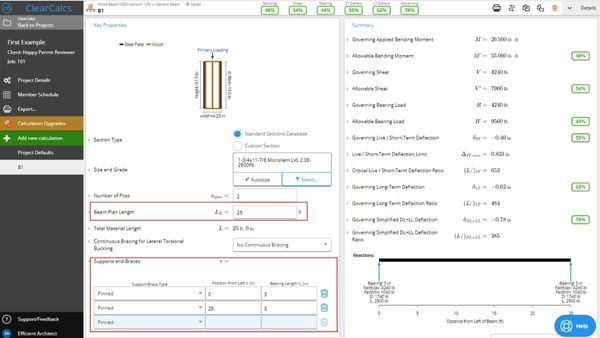 "When Google first came out as a search engine, one of the things that they did that killed [the other search engines] is when you go to the Google homepage, there's a search bar and nothing else. It's something about the degree of simplicity that is comforting to users. And I totally fell for that when I first learned about ClearCalcs."

“We have traditionally been hesitant to sign up for a subscription-based software, which almost stopped the deal. I was also worried that I would hate losing a degree of control over the files, given the software is cloud-based. But it hasn’t been a problem, and I appreciate that the software is constantly updated with the latest code information.”

“I also had great customer service before and after the sale. That meant a lot.” Jim added.

After using ClearCalcs, Jim said there are two things about ClearCalcs that brought significant improvement to the team.

“I like that ClearCalcs shows the code reference section for each calculation and function. That means every time I use it; there’s a potential for me to do some additional research and further deepen my understanding of the codes and how they affect design.” 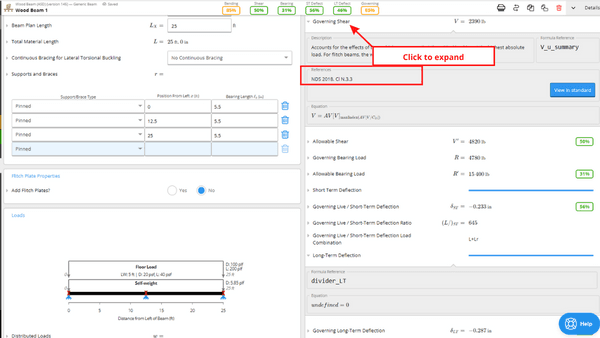 “The way it works in the state of Oregon and several other states in the US is architects are allowed to do structural engineering to the capacity that they deem themselves competent.”, Jim explained.

“One of the things that I dig about ClearCalcs is it has all those code references in there. So when I get to a part of the calculation that I'm not particularly familiar with, I can use that data to go directly to the code sourcebook, pull it apart, and find out why the calculation works that way”.

“It benefits me then because I become better at my job as an architect, and it also increases the reliability of my calculations.”

“I also like the clarity of how the calculations are organized and presented. They help me better understand the factors that affect the design in our projects and how to design more efficient structural solutions as a result.”

At Brittell Architecture, the team occasionally gets contracted for small consulting projects.

“With some of our institutional clients like a couple of school districts we work with, sometimes they’ll want to modify an existing building.”

“For example, we had a school district that wanted to remodel part of this shop and put a big overhead door in so they could get equipment in and out easier for the students. So really, all we were getting hired to do in that instance was to size some beams and figure out how physically it would work and reduce the structural calculations. In that situation, we start using ClearCalcs immediately.”

Even when the team is working on large projects involving structural engineers doing most of the structural design work, the team would still use ClearCalcs for ad-hoc decision-making during the project.

“The other day, for this school project we’re building a big gymnasium for, we had a contractor who wanted to look at an alternate system for the roof frame, and he wanted a rough estimate of the beam size. So, I figured it out in 15 minutes in ClearCalcs and sent it to him with the understanding that he could get the pricing based on the numbers.”

“Eventually, it will go through the process before the contractor orders the material. And before we notify the building official, the structural engineer will look at it and make his calculation too.”

A portion of Jim’s work also includes construction administration. On commercial and institutional projects, Jim said his role is to answer questions as they come up during construction.

“For example, as part of this project, we’re modifying an additional locker room next to the building. When we took a wall out, we found the structure was nothing like what we thought it was on the existing drawing. So we had to go back and retroactively redesign a portion of an old building so that the new building could hook onto it correctly.

The contractor called me, and he was freaking out. So I pull up ClearCalcs and say, ‘you know, you could use an 11-inch joist, and it will work structurally.’ So we ended up having a couple of options, which still depends on what the structural engineers want to do, but with ClearCalcs, I can say that I’m confident that we can fit the structure into the space we have available.” concludes Jim.

How has ClearCalcs changed the way Brittell Architecture operates as a business?

To Jim, using ClearCalcs as an architect has made him more confident in his structural engineering capabilities.

“I told my colleagues that ClearCalcs is great because it has a simple, clean interface that allows you to get to work quickly and clearly shows what is happening in the calculation so you can make smart choices in structural design.”

“It also reduces errors, with a project organization system that helps you keep your work organized, and a way to transfer loads from one member to the next, so you don’t have to update your calculations when you change the design.”

“I think our calculation packages for submittal are also more organized (and attractive) than before. That makes me feel more confident in our submittal.”

Experience the full power of ClearCalcs with a 14 day free trial and start being more productive.