Why engineers, architects and building designers depend on ClearCalcs to deliver their best work anywhere, anytime.

How Criterium Engineers is changing how engineering is done, turning it into a collaborative team process with the help of ClearCalcs.

In second grade, Helen Watts declared that she wanted to be an engineer and build things. With a passion for turning design on paper into structures and buildings, Helen and Nathan Powelson, who also knew from a young age that he wanted to go into engineering, make up the structural expertise leaders at Criterium Engineers.

We sat with Helen and Nate, delving into the back-story of this powerful duo and how they are changing how engineering is done, turning it into a collaborative team process with the help of ClearCalcs.

Founded in 1957 and now one of the US-leading structural engineering consulting firms, Criterium Engineers helps building owners, homeowner associations, real estate investors, and contractors understand the buildings they own, manage, or purchase.

In Helen’s own words: “We do a different bunch of core things at Criterium. One of them is what you call a traditional design shop, and then we also do reserve study for condominium associations, as well as building inspections.”

How Criterium Engineers supercharge their design workflow with ClearCalcs

Across its offices, the company reviews about 200 engineering designs annually, 75% to 85% of which are done in ClearCalcs.

“When structural things come up, it’s my job to make sure everyone in the organization know about it.”

One of Helen’s role as the structural expert leader is to allocate structural design work to the team within the organization. The design query could come externally from customers, or internally from Criterium Engineers’ many offices around the country, and the designs can vary from a straightforward to complicated.

“The majority of our calculations, unless it’s something very odd, are done in ClearCalcs.”, Nate said.

According to Nate, in a lifecycle of the project, a client may approach Criterium and say, “Hey, I want to do this to my building. And we’ll say, okay, we can do some of that, but we can't take out all the supports in your house unless you want to run steel beams and turn it into a moment frame. And they're like, oh, that sounds expensive. We thought this was going to be pennies on the dollar.”

“And then we take what we do in ClearCalcs into CAD, or have someone drafted it, send it to the client.”

Nate concurs to the power of ClearCalcs in speeding up their work as a team.

“Here [at Criterium Engineers], we seem to get one request a week: ‘Hey, if I put this steel beam on the bottom of this 200 year old timber, how much strength do I get?’ Getting a program to do that versus spending hours writing through that is something that we're highly interested to save time.”

Every once in a while, Helen said, a complex design comes her way that her team wants her ‘to fix’.

“For example, just about a week and a half ago, Nate said to me, ‘wow, this is another really weird connection.’ I'm like, yeah, there's another one coming. And the only way that I can evaluate them is by using tools like ClearCalcs.”

“We had a guy who wanted to put a roof deck over the entrance to his little residential building. He wanted basically no post and VMS (visible means of support). So we gave him one option, and we gave him another one which is a whole lot simpler and cheaper. We run this all of this scenario in ClearCalcs.”

“Anyone can design a new building, it takes a real engineer to figure out how to get new and 120 year old framing to play well together.“, Nate quipped.

“I also like the speed at which you can do the what-ifs with the utilization checks”, Helen added.

“For example, a client wanted to get rid of the rafter ties, so Nate and I got on Zoom and I said, what if we do this and the utilization check lights went all red. What if we stick it this way? And we got the green light. I like the way the painful stuff are now speedy”.

Structural engineering review is an important part of the project workflow at Criterium Engineers. Every project is reviewed by another engineer before it goes out.

“Criterium is really big in that nothing goes out without getting a second review,” Helen says.

Doing the design in ClearCalcs and being able export the printout means our calculations are legible and other engineers can review it. 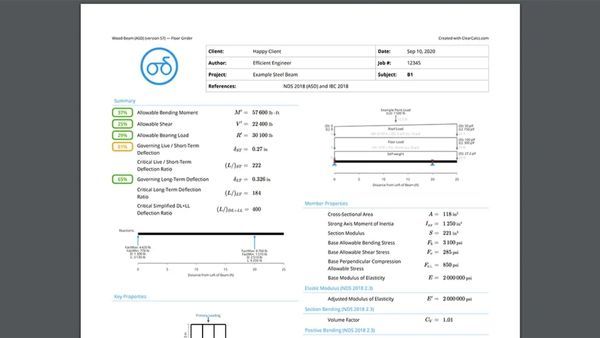 “Part of the reasons why we went with ClearCalcs was when we looked at the various programs, Nate liked the output on ClearCalcs and how the platform explains what was going on. It meant it was easier for him to review my works and vice versa.”, Helen says.

“Nate and I work really well together because I come from construction and he from the design side of it. So, we’re very yin and yang, and I think it makes our design much stronger when we work together”.

What has improving their design workflow with ClearCalcs done to Criterium Engineers?

Criterium has more than 30 franchise offices across the United States and Canada, comprising mostly of mechanical, electrical and civil engineers.

“And if they need to know anything about structural engineering, they will normally ask Nate or me.”

Using ClearCalcs has really transformed the way Criterium team collaborates with each other. In addition to the webinars they host to share knowledge with the franchise offices, Helen said the ability to run analysis collaboratively on ClearCalcs online means there is a cross pollination of knowledge that makes the engineers in her team smarter.

“If you want to go and do something, I’ll say, let’s get on Zoom, bring up ClearCalcs and I’ll talk you through it.”

Experience the full power of ClearCalcs with a 14 day free trial and start being more productive.